Signs of Antifreeze Poisoning in Dogs

One of the worries that veterinarians and pet parents need to be aware of, especially in the winter is the risk of antifreeze poisoning.  Have you ever heard of dogs suffering from antifreeze poisoning? Antifreeze can sometimes be interesting to dogs, and some dogs may feel compelled to drink it if they find it. Unfortunately, antifreeze is also extremely poisonous and can be very dangerous to pets as well. 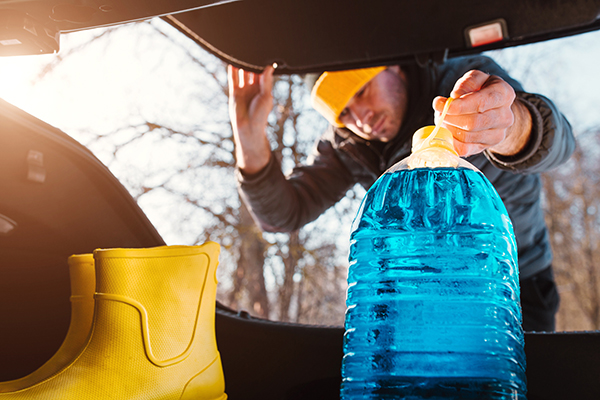 In the article below, you’ll find out more information about antifreeze and what it can cause in terms of symptoms. You can use this information to learn how to recognize antifreeze poisoning in dogs more easily.

Antifreeze is a liquid that is used in the operation of vehicles. Most of the time, it is used to keep antilock braking systems from freezing up, but it can also be used in brake fluid. In other applications, it can be found in some solvent and paint as well.

The main ingredient in antifreeze is a chemical called ethylene glycol. This chemical doesn’t have a strong smell, but it has a sweet taste, which is why some pets may be prone to ingesting it. And since antifreeze is a liquid, it is unfortunately not difficult for pets to consume it.

What are the Symptoms of Antifreeze Poisoning in Dogs?

Symptoms of antifreeze poisoning in dogs can be dependent on how long ago your pet actually consumed the liquid. Knowing the common symptoms of this condition is important, even if you don’t know how long ago your pet drank it, because antifreeze poisoning is something that needs immediate medical care in order to have the best chance for recovery.

Below are common symptoms of antifreeze poisoning in dogs, based on how long ago this liquid was consumed by your pet:

Shortly after ingesting antifreeze, dogs will become lethargic and weak. They may start urinating excessively and may also have excessive thirst that goes along with this symptom.

Dogs during the first half-hour after consuming antifreeze will likely vomit a lot and may seem wobbly on their feet or uncoordinated. They may also suffer from low body temperature, which can come on suddenly, and could have multiple seizures during this time frame as well.

If you notice these symptoms in your dog and suspect there is any chance antifreeze was ingested, you need to bring your dog to the emergency vet right away. By responding quickly, you can help your dog recover.

Strangely, many of the symptoms of antifreeze poisoning in dogs look better after the dog reaches the 12-hour mark, and for the remainder of the first day following ingestion. This odd change can make pet owners think their dog is improving, when in reality, the dog is getting much worse.

The symptoms that worsen during this period are less visible ones, which is why they are not always noticed by pet owners. Dogs may have a significantly elevated heart rate and may have difficulty breathing at this point. Dogs are also usually highly dehydrated by this stage.

By this point, the dog’s body is severely affected by the presence of the antifreeze. The kidneys may be swollen so much that they are visible under the skin, and they will go into kidney dysfunction or failure in a short time. Dogs will be unable to urinate at all and will become more and more lethargic and weak.

During this stage, seizures may worsen again. Dogs may go into a coma at this point or may suffer from extremely severe dehydration due to excessive vomiting. Sadly, it does not take long after this stage for most dogs to die.

How is Dog Antifreeze Poisoning Treated?

Emergency vets can give pets an antidote that cuts down significantly on the risk of death from antifreeze poisoning. However, it is crucial that pets receive these treatments within just a few hours of ingesting the antifreeze, or they may still die.

Rarely, some pets who ingest antifreeze can still recover from this poisoning even if they are not given the antidote in time. However, this is extremely uncommon and usually only happens if the pet has ingested just a few drops of antifreeze. If the pet has consumed more than a little antifreeze, the risk of death is very high.

Without the right antidote at the right time, dogs may not survive, so it is extremely necessary to make sure you get your pet to the emergency vet as quickly as possible in this situation.

If you think your dog is showing any signs of antifreeze poisoning—or if you even suspect your dog has ingested antifreeze—take to the emergency vet immediately. The sooner you get your dog to the vet, the easier it will be for her or him to recover from this serious condition.

Make sure you always keep antifreeze stored properly to reduce the risk of your pet being exposed to it. Additionally, if you have children in your household, storing antifreeze in the proper container and on a high shelf or in a locking cabinet is even more crucial.

Antifreeze poisoning in dogs is very serious and can lead to extreme health problems if not treated in a timely manner. If you notice any of the signs mentioned above in your pet, or if you know for sure that your dog has ingested antifreeze, seek emergency veterinary care immediately. When it comes to this condition, you never want to wait to make sure your pet gets the proper treatment.